The Mini Golf Industry Is changed By The 3d Printed Putter

Every golfer wants that perfect club with the ideal feel, weight and balance. The club can influence the shot and win or lose the game.

It is now believed that 3D printing can help golf equipment manufacturers to change the way that golf clubs and putters are made.

This is turn could revolutionize the Mini Golf industry. This has all come about with the creation of the Ping putter – a 3D printed model that is wowing golfers and changing perceptions.

Why Would 3D Printed Golf Clubs Be Better Than Current Options? 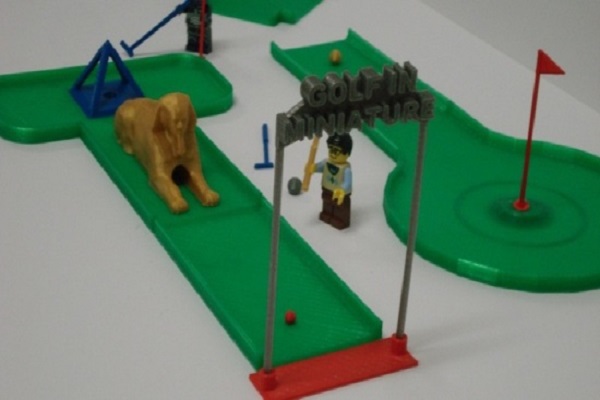 3D printer clubs are all about fine tuning a design and customizing a golf club to suit the user. This should mean that a club is more accurate, leading to a better performance on the course. It could also offer greater control over the club, which again could have a significant impact on the game.

There has been some concern in the Mini Golf industry about players adapting their clubs to anchor their strokes. This trend recently led to a ruling by the United States Golf Association forbidding players from doing so. A 3D printed custom club could ensure that player no long need to resort to these tactics.

There are always going to be some concerns about quality control with 3D printed models. Some people still see these models as rough drafts with clear layers, odd finishes, and no refinement. The cheaper, early prototypes did highlight these problems – such as the early 3D printed car – but modern, high-end machines have come a long way.

There is the potential to build an entire club in one go using a detailed digital plan. This means one smooth object with no detachable parts or joints. Standard clubs and putters have a weak point where the different materials and sections are welded together. 3D printing would quickly eliminate this.

This Process Should Lead To High-Quality Products That Perform To User Expectations.

The company claims that this printing process will lead to a much stronger, much durable iron than current cast models. This is some finishing work needed on the putters to get that precise, smooth look, but nothing too drastic. The attention to detail on the putter is another element that will surprise some critics.

This digital, mechanical building process doesn’t always allow for the same care and details of traditional manufacturing methods. However, this Ping putter retains the shape and texture that golfers expect. It even has the trademark striping on the flat edge.

The factor that stands out with this new club is the reaction of players during the test run. Players were sent onto the course with a standard cast G25 iron and a 3D printed one. Ping reported that the players could not tell the difference.

This reaction is just what the company wanted as it validates the methods and potential of 3D printing, but where do they go from here? The Ping putter wowed crowds at the 2015 PGA Merchandise show as star attractions and curiosity, but is that all it can be for now?

What Does This Mean For The Future Of Club Production In The Mini Golf Industry?

There are two ways of looking at this reaction from players. The clear similarities between the printed and cast models suggest that players will have no problem making the switch. The club only does not look or feel odd to them.

However, the extreme similarity poses the question of whether this 3D printed alternative will have positive effects on the game. Is this a better option than cast iron or just a viable alternative? At the moment, this Ping printed putter is not going to be an accessible model so that this debate may be a little ahead of time.

The current plan is to offer the putter as a VIP model where players can pay between £5000-6000 to work with a designer to build a model to their personal specifications. The company believes that 3D printing will one day have a more accessible role in the creation of golfing equipment.

Right now, it is just too challenging and costly to make these putters on a larger scale. The printers cost $1 million and the head of the club alone takes 24 hours. The whole process, from creating the personal cast to getting the finished club could take six weeks. This is all ambitious work, and a long way from being a reality, but it raises some interesting questions about the prospects of 3D printed golf equipment in the future.